Best Anti-AdBlock Plugins and How to Use Them Properly

I should warn you. This post is going to hit on a touchy subject…

Users love them. Website owners hate them. Both sides have legitimate arguments.

Users are worried about overly intrusive ads (or sometimes ads that just straight up contain malware) and website owners are worried that, by losing out on revenue, they’re essentially creating content for free.

No matter what, ad blockers aren’t going away. In fact, their usage grew by about 41% in 2015 alone.

One way website owners have fought back is through the use of anti-ad blocker technology.

Facebook was just in the news for their failed attempt at combating ad blockers. Should you, as a WordPress site owner, join with Facebook in fighting against ad blockers? Let’s dig in and find out.

Should You Use an Anti-AdBlock Plugin?

Whether or not you use anti-ad blocking technology depends entirely on how you implement it. If you’re thinking of totally blocking ad blocker users, I think it’s a horrible idea (and the data backs me up). But if you just want to notify, it can be effective as long as you do it correctly.

How to Use Anti-AdBlock Correctly

If you do decide to implement an anti-ad blocker strategy, there’s a right and a wrong way to do it.

Take a look at Forbes. Though they’ve backed off a little bit, they’re fairly universally reviled for their anti-AdBlock strategy which essentially entirely blocks ad blocking users. Ad blocker users have to disable their ad blocker to even view the site: 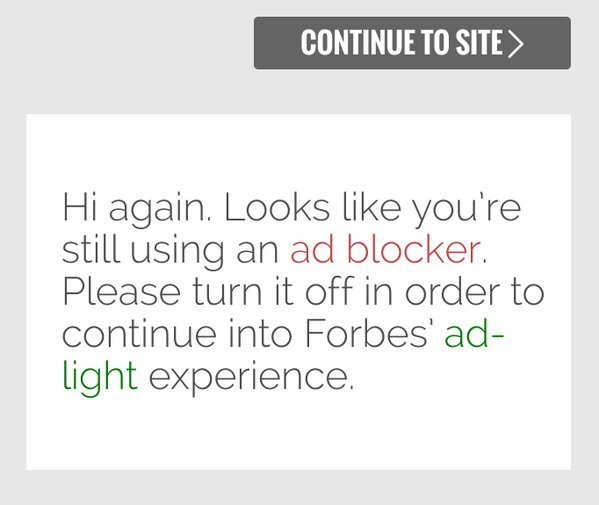 This is bad! It will annoy your users like crazy. And no matter how much you hate ad blockers, the negative feelings you evoke won’t be worth whatever tiny revenue you gain. Most people just won’t visit your site at all. So you’re still making zero money, but now your traffic is lower, too.

Who knows, those ad blocking visitors might share one of your URLs to another reader who doesn’t have an ad blocker. If you totally block them, you’re missing out on that chance to save a minuscule amount of bandwidth.

So, don’t be like Forbes. It’s a bad idea to completely restrict users who have ad blockers.

Here’s what to do instead:

OkCupid is a great example of using anti-AdBlock effectively. 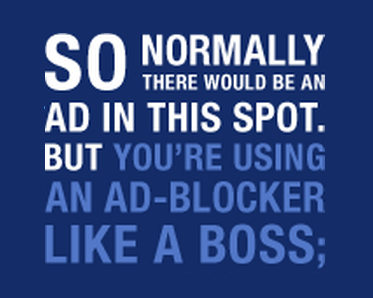 Users can still interact with the site normally, but they’re kindly asked to keep supporting the site in a fun and respectful way and told that they can pay $5 to remove ads forever. Even if most users don’t take any action, you’re still managing to reach ad blocker users without generating any negative feelings.

If you call people out for using an ad blocker, be respectful and try to keep it light. Appeal to their human side. Ask them to support you by whitelisting you, or even just sharing your links with their friends. They’re not evil – they just don’t like ads.

Most importantly, actually make sure your ads aren’t annoying. If you keep your ads to a minimum and make sure you never inadvertently serve up malware, reasonable fans of your site should be willing to whitelist you.

So, if you’ve decided you want to implement some anti-adblock functionality, here are the best WordPress plugins to help you do it.

Here are five of the best anti-AdBlock plugins. Four are great options, and the fifth will let you totally block ad blocker users (again – I think that’s a bad idea! I’m just including it in case you want to go ahead and ignore my advice).

Adblock Notify is a free plugin from Themeisle. The plugin lets you do things the right way:

If a user with an active ad blocker visits your site, you can give them a custom notification message. You can also redirect them to a completely different page if you want, but I don’t think that’s a very good idea.

You can use custom CSS to create a fun and unique message – no need to limit yourself to boring text.

And finally, the last cool feature is statistics. Adblock Notify will tell you how many of your users are using an ad blocker so that you can get a better idea of how much potential revenue you may be missing out on.

So while Adblock Notify will let you both notify and block users, I recommend you only use it to create a custom message. Use the custom CSS options to make your message unique – if you actually put some time into crafting the message in a fun way, you’ll get better results and avoid annoying users.

In the free version of the plugin, you can automatically display a popup to users with ad blockers. The popup asks users to whitelist your site (see the example above).

If you upgrade to pro, you can customize your message text and show a permanent sticky message at the top of your site.

But this is the coolest feature of the pro version:

You can turn it on or off for different pages of your site. So, if you don’t have advertisements on all your pages, you can only enable Simple Adblock Notice for pages that do have ads. That way you won’t bug ad blocking users if you have nothing to gain from it.

The pro version of the plugin only costs $5, so we’re not talking a huge investment.

Ad Blocking Detector has a really cool feature that differentiates it from the other options on this page.

It includes a tool that lets you specify two different versions of content. You can display one to ad blocking users, and another to users without ad blockers.

For example, you could use it to display an ad to regular users, and an image to ad blocker users. This would let you accomplish something like OkCupid. You could even display a PayPal donate button to ad blocker users (with a fun message). I’m sure you can come up with some other cool uses for this feature. It’s pretty nifty.

If you’re willing to put the time into creating something really unique, I think this plugin gives you the most power to modify how your site displays to users with ad blockers.

AdBlock X gives you powerful tools for analyzing the effect of ad blockers on your site. You can track visitors in detail and see when/if they turn off their ad blocker.

You can also handle users differently by their device and set up different rules for notifying ad blocking users.

If you’re interested in getting lots of data while still being able to notify users, then AdBlock X is a good option.

If you think I’m totally off-base in my assessment of ad blockers, you can use Block AdBlock to totally lock your content until users disable their ad blocker. Users will get a big modal warning that won’t disappear until they remove their ad blocker. Bad idea – but this plugin will get the job done if that’s what you want.

Ok, MailOptin is technically a lead generation plugin, not strictly an anti-adblock plugin. But as part of that, it actually includes a detailed AdBlock detection function that lets you display a notice to adblock users as a modal popup, sidebar widget, top bar, and more.

As well as other built-in browser ad blockers.

So how do you control your adblock warning?

Well, when you set up a MailOptin campaign using the plugin’s real-time Customizer interface, you have an option to activate your opt-in based on the Visitors Using Adblock display rule.

You can use the rule to display a specific opt-in to adblock users:

Or, you can also customize your opt-in to display more of a general notice with a CTA. Here’s an example using the plugin’s Bannino theme:

To learn how to set up this type of adblock notice, check out this help article from MailOptin.

If you want something that can do double-duty for growing your email list and displaying an adblock notice, then MailOptin is a great option.

The adblock detection is only available in the premium version, which starts at $69.

Whatever you do – don’t abuse these plugins. Ad blockers are popular and only increasing in use, so you need to find a friendly and non-combative way to deal with them. If you get too aggressive, you’re just going to alienate your user base.

So, notify – but do it in a fun and friendly way. You won’t convince everyone, but you also won’t alienate people. And that’s still a win.

I’d love to hear thoughts from readers in the comments. I know people usually have strong opinions. Personally, I use an ad blocker but whitelist sites that I frequent so I can still support them (that includes WPLift!).