So if you, at a later date, want to find that file, you better hope you can remember what the file name is. Or, you could try actually organizing your WordPress Media Library with the same types of folders you use in your offline life.

In my Real Media Library review, I’ll show you how you can use this premium, but affordable, plugin to do just that. Real Media Library has an impressive 4.85-star rating on over 4,200 sales at Code Canyon, so I’m excited to dig in and see what this plugin can do.

In a nutshell, Real Media Library adds folders and categories to the native WordPress Media library to make it easier for you to wrangle all of the files you keep there.

Here are all the ways in which it helps you do that:

Who Is Real Media Library For?

I’d say pretty much anyone who’s making heavy use of their Media Library could benefit from Real Media Library. But because of the easy image gallery features, I think it’s especially beneficial for people who work with lots of images and image galleries.

Hands On With Real Media Library

Ok, this is the part where I actually install the plugin on my test site and give you a hands-on look at how it works.

Once you install and activate the plugin, it just starts working right away. Nothing to configure – you just head to your normal Media Library tab and you’ll see a nice prompt telling you to add your first folder. 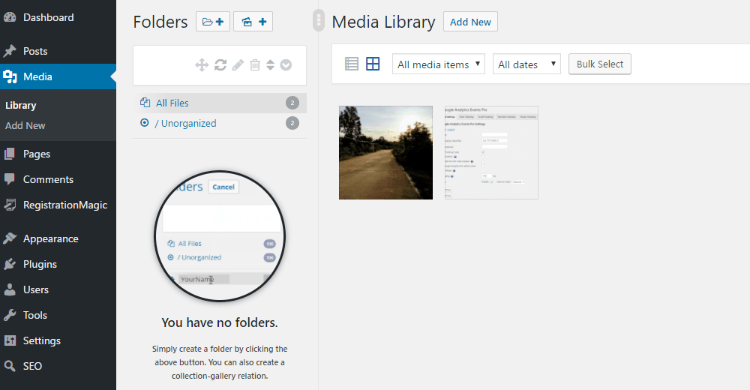 One thing that I immediately noticed is that the plugin is really well designed from a user experience perspective. It immediately told me what I needed to do first. And whenever you hover over a button, there’s a helpful tooltip that appears to let you know what the button does.

Because icon-based interfaces can be a little confusing sometimes, this guiding hand was much appreciated.

Adding a Folder to the WordPress Media Library

Ok – I’m a team player so I’m going to follow the plugin’s instructions to create a new folder. All you do is click the button, give your folder a name, and then you’ll see it in the sidebar:

To move files into that folder, all you need to do is drag them over. It basically works exactly like files and folders interact on your operating system. You can also use Bulk Select to select multiple files to move at one time.

If you want to nest folders within one another, all you need to do is click on the new folder button while inside your folder. And you can always change how folders are re-arranged by clicking on the up/down arrow icon:

That being said, you still have some new options.

First off, you can choose how you want files to be sorted for each individual folder: 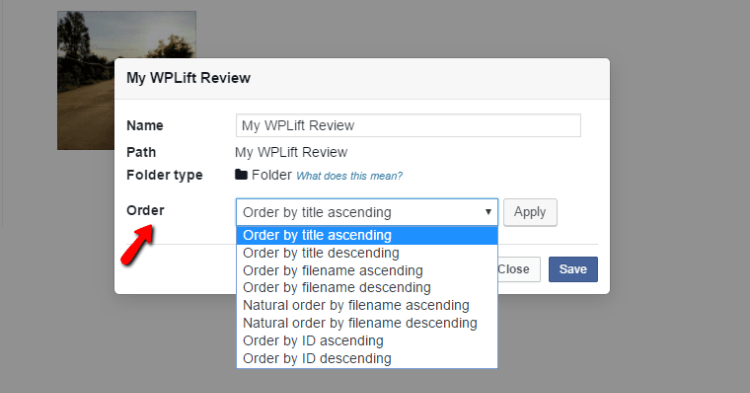 And you can also still use the normal filters for media type and date:

Here’s something I really like – when you use the normal Insert Media button in your WordPress posts, you’ll still be able to see your folders: 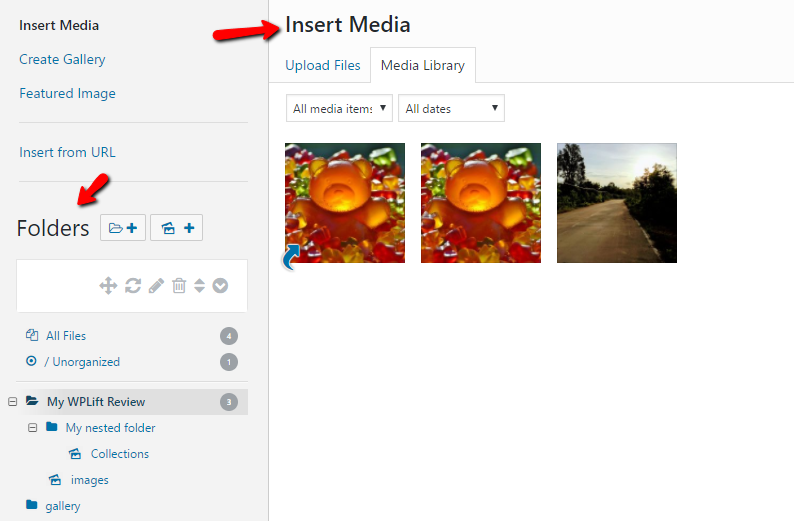 This makes it super simple to find an image you’ve already uploaded.

And if you need to upload a new file through the Insert Media interface, you can actually upload that file straight to a folder, which will definitely save you some time you would’ve otherwise spent organizing the file after you uploaded it:

As I mentioned in the feature list, you can actually use Real Media Library to create an image gallery straight from all of the images in a folder. 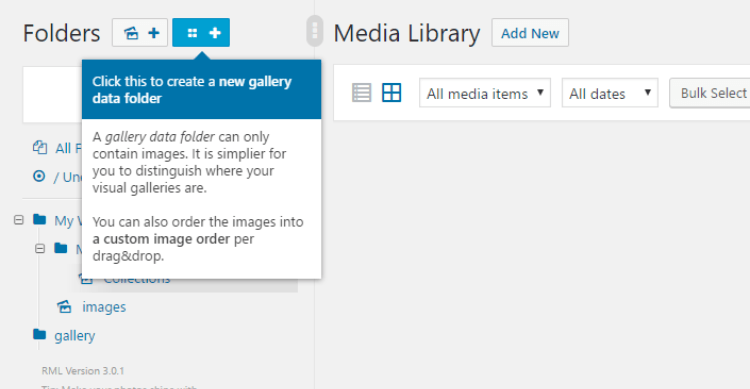 Once you do that, you can use the shortcode builder inside the WordPress Editor to quickly build a new gallery:

Then, on the front-end, you’ll see your gallery:

Another nice thing about the plugin is that it’s extensible to work with other plugins.

He also invites other developers to contact him via Slack about even closer integration.

Real Media Library is for sale at Code Canyon, which means you’ll get standard Envato Licensing on your purchase.

The plugin itself costs $24, which I think is quite fair given what some other Media Library folder plugins go for.

As for documentation…it could be better. As I said, most of the plugin is well-documented inside the interface. But I really struggled to figure out how to create a gallery folder. And it would have been much easier for me to solve if there were some detailed written documentation about it instead of a vague reference inside a short FAQ page.

The only two areas where I really ding Real Media Library’s functionality compared to other Media Library plugins are:

Other than that, it’s very pleasant to use. And I love that you can access your folders directly inside the Insert Media area.

If you need WordPress Media Library folders, it’s definitely up there at the top of the list.

How to Connect Your WordPress Media Library to OneDrive

Extend the WordPress Media Library With These Plugins