You may not give them credit, but forms are an essential part of your WordPress site. They let people contact you, help you build your email list, allow visitors to register, and just generally power your WordPress site in any number of unsexy ways.

And that oft-overlooked importance is why picking a form plugin for your website shouldn’t be done carelessly.

We’ve already talked about some of our favorite contact form plugins, but now I want to dig into three specific all-purpose form builders: Gravity Forms vs. WPForms vs. Caldera Forms.

All three feature form builder interfaces that go beyond anything you’ll see in Contact Form 7. And they’re also unique in that each takes a different approach to monetization. Gravity Forms is premium, WPForms is freemium, and Caldera Forms is free with paid extensions.

If you’re interested in taking a deeper look at three of best all-purpose WordPress form builders, join me for this three-way comparison.

Before I dive into each individual plugin, I want to provide you with a table summarizing some key information for each option:

Now that you’ve got the big picture, I’ll get into each plugin in detail…

Gravity Forms is probably the first name that comes to mind when you think “premium WordPress form plugin”. It can help you create everything from a basic contact form to multi-page conditional forms with payment integrations.

Here’s everything you can do with Gravity Forms, though some features will require varying package levels to access:

Unlike the other two plugins on this list, there’s no free version of Gravity Forms. Instead, you get three different premium versions.

Here’s what comes with each plan tier: 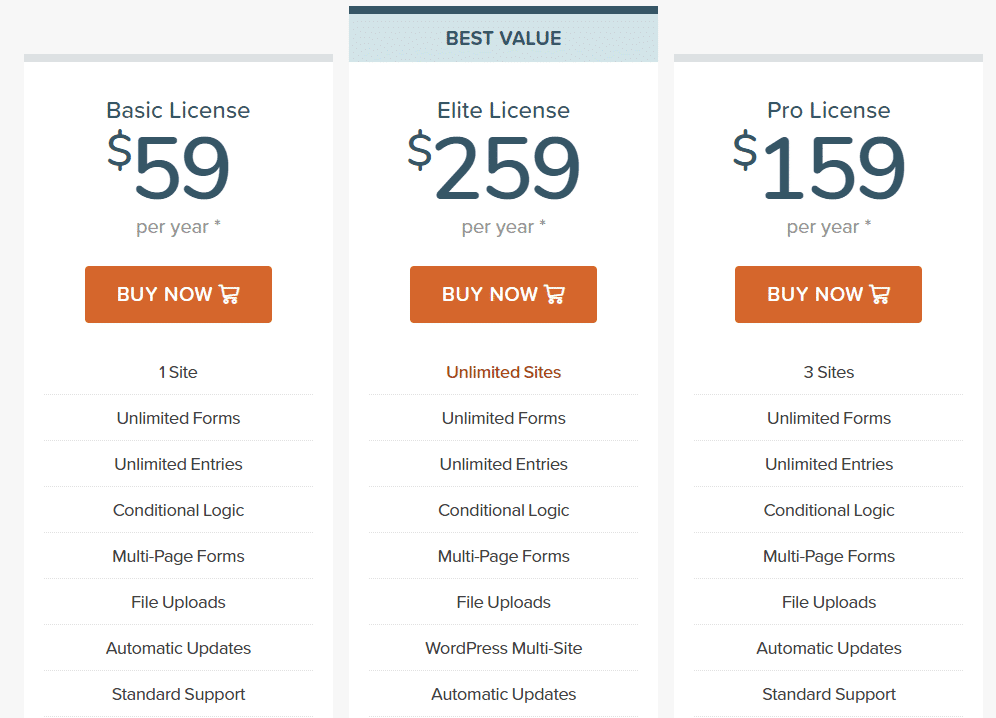 Click to purchase the Pro version of Gravity Forms.

I’ve already written an in-depth review of WPForms, so if you’re interested in all the gory details, I recommend you go to that post. Generally, WPForms functions quite similarly to Gravity Forms, down to essentially the exact same pricing structure. WPForms does throw in a few unique features that set it apart, though.

Out of the three form plugins on this list, WPForms absolutely has the most user-friendly form builder. The builder looks good, is easy to navigate, and should be simple to understand even for beginners. 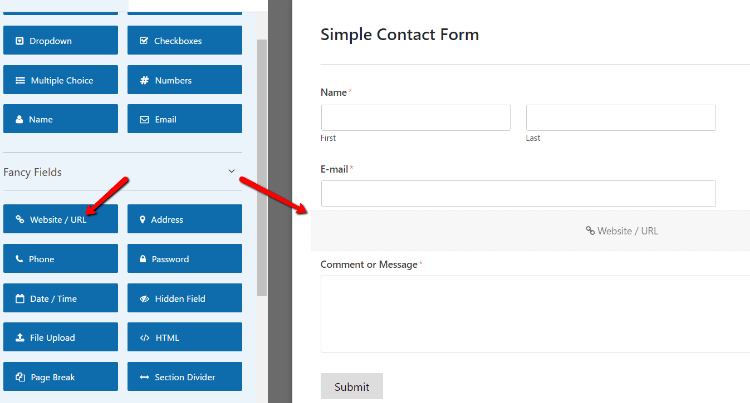 You just drag form fields over to the right side to add them to your form. Similarly, you can rearrange their order by dragging them about. And to edit specific details for each field, you just need to click on it to open the editing window: 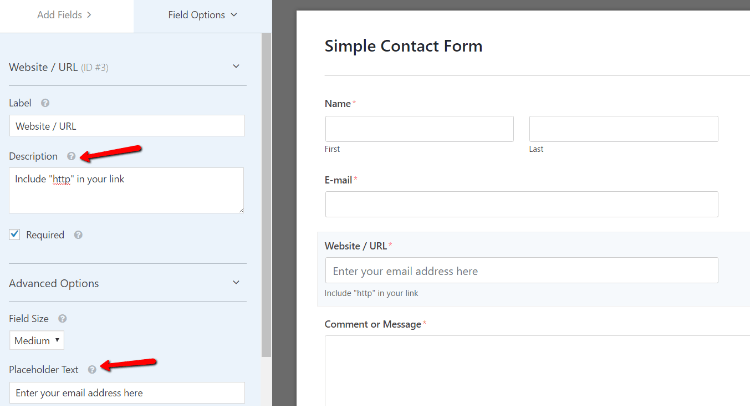 One thing that differentiates WPForms from Gravity Forms is its pre-made templates. It includes templates for a variety of common forms, which make it easy for you to quickly get started.

Check out our full WPForms review for a deeper look.

Here’s what you get with WPForms. And no, I didn’t just copy and paste this from the Gravity Forms feature list!

While WPForms lacks the direct integrations with CRMs that Gravity Forms has, you should be able to still integrate with many CRMs thanks to Zapier.

WPForms has recently switched up its pricing and brought back its form entry-level tier: 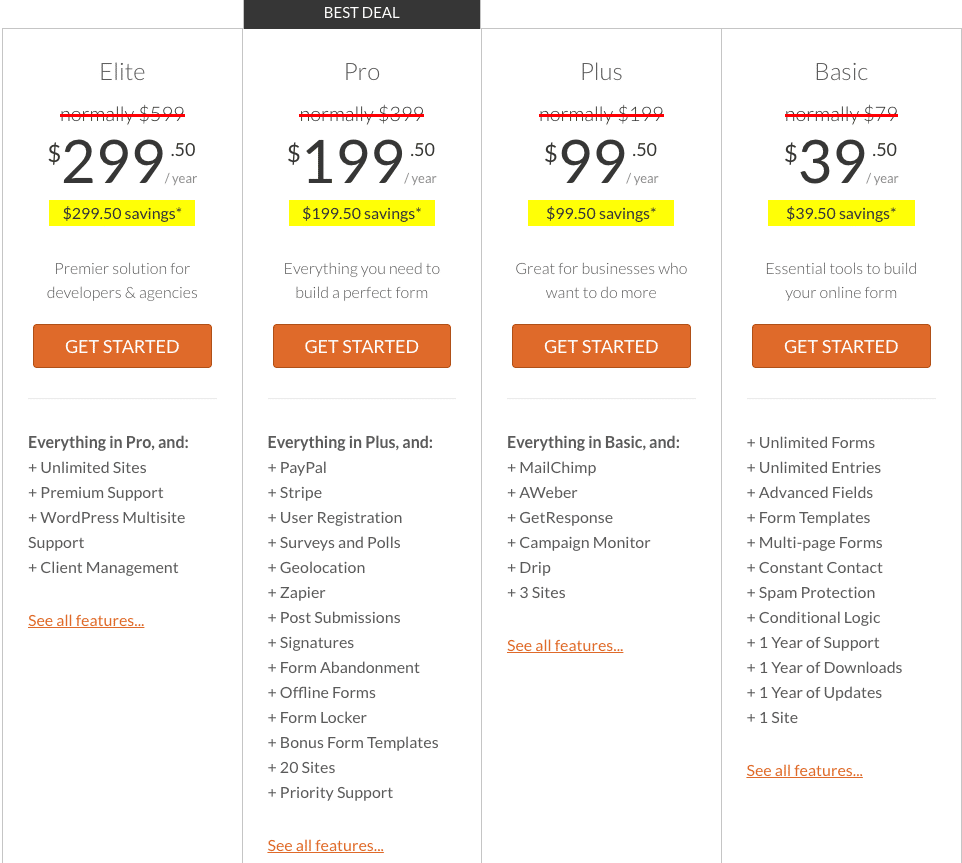 Caldera Forms is unique in that it has, by far, the most functional free version out of all three. You get features like conditional logic and date picker fields for free, whereas both Gravity Forms and WPForms lock those features behind the premium version.

Caldera Forms’ builder isn’t flashy, but it gets the job done. I’m not sure how else to put it. The design is simple and the UI is not always as user-friendly as it could be. But once you get the hang of it, it’s quite simple to create forms.

Like WPForms, Caldera Forms includes some templates to help you get started:

If you’re an advanced WordPress user, or willing to put in a little time to learn the ropes, the interface has everything that you need.

Because Caldera Forms has the most robust free version, I’ll first go through the features available in the free version. Then, I’ll tell you what you can get with extensions or the new Pro plans.

With paid extensions, you can add these features:

Caldera Forms also recently added a subscription service that adds even more functionality alongside the extensions (higher tiers of the Pro plan also get you access to some/all of the extensions):

Caldera Forms has switched up its pricing a lot since we first wrote this comparison. If you want, you can still purchase individual add-ons. Most of these cost $74.99 each, while a few are $99.99 each.

But now, they also have bundles/plans that include various sets of add-ons, as well as integrated email delivery to ensure that the emails sent by your forms don’t end up in people’s spam folders and Form to PDF functionality.

These paid plans start at $74.99 per year depending on which add-ons/features you want: 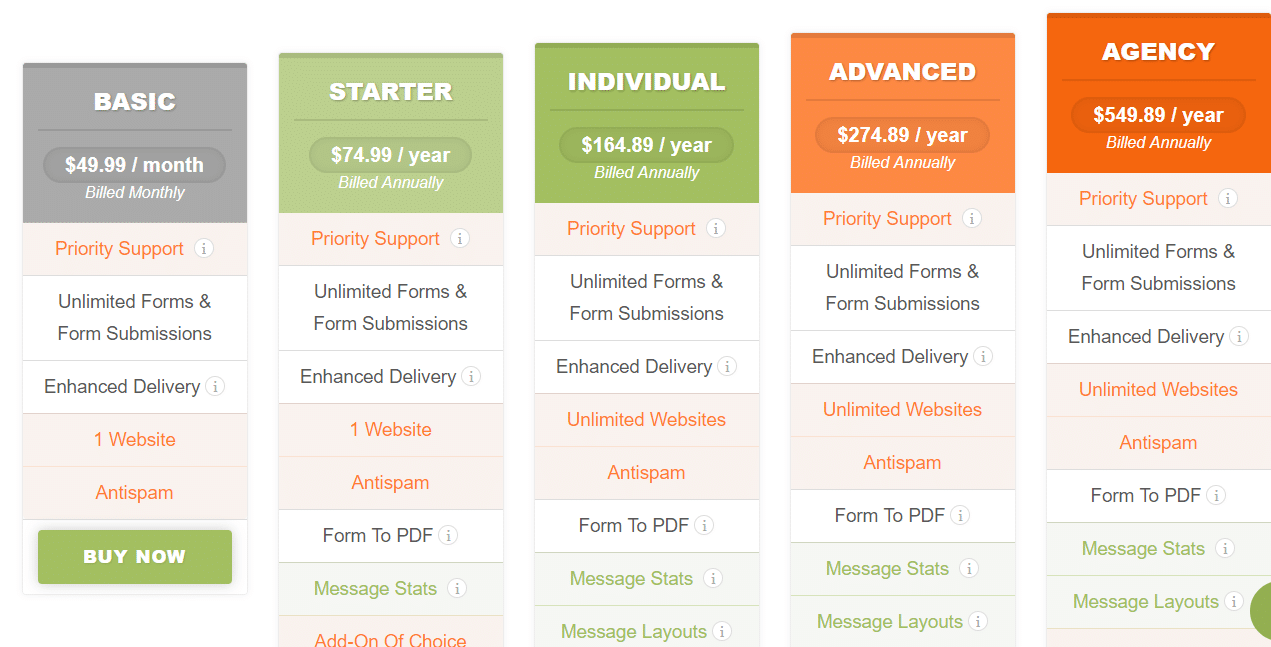 Which Form Plugin Should You Pick?

I won’t give one recommendation because these choices are often constrained by budget options. But to make things simpler, I’m going to eliminate one plugin right away…

While both Gravity Forms and WPForms offer a few unique twists, they still have similar feature sets at similar price points. With that being said, I think WPForms edges out Gravity Forms for regular users because of its more user-friendly form builder and helpful pre-made templates. If you’re a developer, you still might want Gravity Forms for its many development integrations (but you probably already knew that).

So that narrows it down to WPForms vs. Caldera Forms, where the decision isn’t so clear…

Similarly, if you need email marketing integration, you’ll have to go with the $99 version of WPForms. With Caldera Forms, you could just purchase an extension for $74.99. And the difference becomes even starker if you need payments. With Caldera Forms, you can get a single payment gateway for $74.99, whereas it costs $199 for payment support on WPForms.

Of course, if you see yourself switching between email marketing services or payment gateways, or you want more than one feature in WPForms’ plans, then WPForms is better because you won’t have to keep buying new extensions for each service.

Caldera Forms’ new paid plans also throw in a wrinkle, because the email delivery service offers an extra value-add over buying single extensions. Additionally, you can now get bundles of extensions.

Overall, if money’s no object, I say go with WPForms if you’re a regular user. If you’re on a budget, or if you’re a developer, go with Caldera Forms. Caldera Forms’ interface isn’t as nice, but it can offer just as much functionality at a maybe lower price and it has some really neat developer integrations, like the EasyPods add-on.

Have you used any of these form builders? Which was your favorite?

HubSpot WordPress Integration: 3 Ways to Connect Your Site to HubSpot

9 thoughts on “Gravity Forms vs. WPForms vs. Caldera Forms: Which is Best?”