Before I get into my Genesis review, I want to make one thing clear:

This review is not is not about the English rock band. Phil Collins’ angelic voice needs no review.

No, this review is about the Genesis WordPress framework, which fits the theme of this blog just a little bit more.

The Genesis Framework is a popular offering from StudioPress, the same people behind StudioPress Sites and the Rainmaker Platform.

And in this review, I’m going to dig into everything about Genesis and WordPress.

What is the Genesis Framework?

For a beginner, Genesis can be a little confusing because it doesn’t work exactly like other WordPress themes. See, Genesis is a basic WordPress framework that you then style with a Genesis child theme (of which, there are a variety).

Ok, so what does that actually mean?

The Genesis Framework basically sits on top of WordPress’ core code and creates a secure, search engine optimized base upon which you can build your WordPress site. Essentially, it’s your site’s foundation…on top of the foundation that the core WordPress software already offers. A foundation enhancement, if you will.

But installing the Genesis framework by itself doesn’t give you a very aesthetic website.

That’s why you use Genesis child themes to in turn sit on top of the Genesis Framework and add aesthetics.

And that’s your quick introduction to the Genesis Framework!

Benefits of the Genesis Framework

The benefits of the Genesis Framework are hard to “show” because most of them happen underneath the hood. That is, I can’t show you a neat page builder or a cool header effect.

But just because they aren’t immediately apparent on the front-end doesn’t mean Genesis’ add-ons aren’t helpful. Here are the core benefits of Genesis:

Who is the Genesis Framework For?

Because one of the things Genesis does is provide a clean code base to build on, Genesis is great for developers. But it’s by no means limited to that crowd…

Because it’s super easy to install a Genesis child theme (more on that later), Genesis is also great for beginners who want a WordPress site that’s well-coded and optimized. ThemeForest themes are not always…well-coded (to say the least). But with Genesis, you always know that your base is quality.

But the Genesis Framework Isn’t for Everyone

While Genesis is great for users of all levels, it’s not great for every single person. If you’re someone who likes the beginner friendly, drag and drop website builders like Divi, X Theme, or Avada…you’re probably going to be disappointed by the Genesis Framework.

Because many of Genesis’ improvements happen out-of-sight, you might feel like you’re missing out on the features offered by those themes.

For example, you’ll definitely miss the huge number of customization features offered by Divi, X, Avada, et. al. While Genesis child themes do give you control over how your site looks, it’s not nearly as detailed.

At the end of the review, I will discuss a few third-party tools that let you get some website building functionality with Genesis, though.

Hands-on With the Genesis Framework and Child Themes

Enough chatter. Let me show you how Genesis actually works using one of my test sites.

When you activate the Genesis Framework by itself, you’ll see something like this:

That’s, uhhhh…not especially beautiful (in my humble opinion). Remember how I told you that you always need to use a child theme with the Genesis Framework? This is why. Right now, pretty much all I’m benefitting from is the clean code and search engine optimization.

If you go to the options panel for the Framework alone, all you get is some basic theme settings and SEO settings: 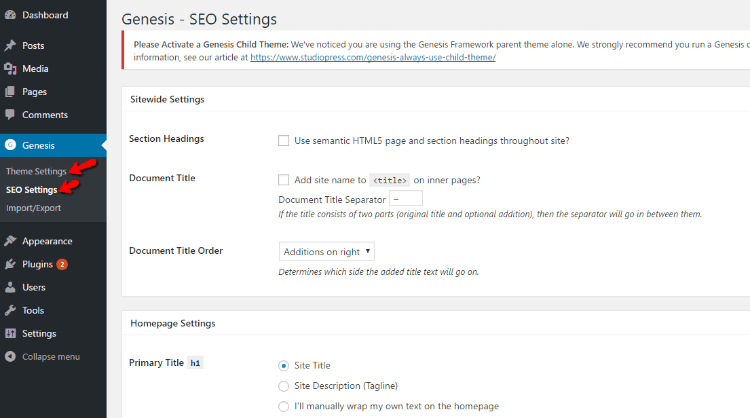 To get something a little more aesthetic, you need to add a child theme. Don’t worry, installing your child theme is as simple as uploading it like any other theme. Once you do that, you’ll see something that looks like an actual WordPress theme:

For example, to quickly change your color scheme, you just need to choose from the dropdown:

What Genesis Child Themes Are Available?

For the example above, I used the Centric Pro child theme. But it’s far from the only Genesis child theme out there. StudioPress currently sells 60 child themes through its official store and you can also find plenty of third-party child themes.

The good part about that? You have a great deal of flexibility in how you use the Genesis Framework.

The bad part? Each child theme usually costs extra money on top of what you already spent on the Framework. 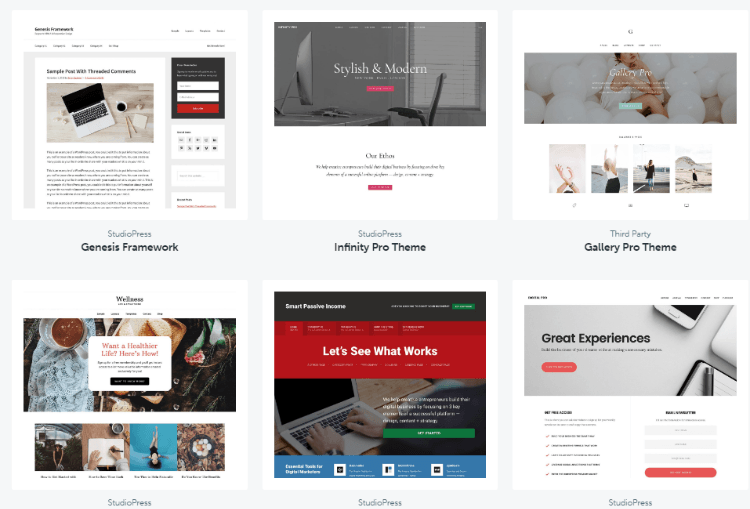 Remember how I told you that there are third-party tools that can help add a bit of a “website builder” theme to Genesis? One of those options is the Dynamik Website Builder from Cobalt Apps.

Dynamik Website Builder acts as a Genesis child theme that you can customize even if you don’t know any code. That means you get all of the benefits of the Genesis Framework, while still getting some of the flexibility offered by themes like Divi and Avada (though it’s by no means a perfect substitute).

While Dynamik Website Builder doesn’t require code knowledge to use, total beginners will probably struggle to use it. Developers and power users will have no issue, though.

In addition to Dynamik Website Builder, there are also other tools like the Genesis Extender Plugin and Design Palette Pro that can help you customize the Genesis Framework.

And because of Genesis’ popularity, there are tons of third-party resources to help you get more from the Genesis Framework. While it shouldn’t be a deciding factor by itself, it’s always nice when a theme has a vibrant ecosystem because it allows you to find help when you need it.

How Much Does the Genesis Framework Cost?

By itself, the Genesis Framework only costs $59.95. But as I mentioned, you almost definitely will need a child theme on top of that. If you buy that child theme through StudioPress’ store, you’re typically looking at $99.95 total (that is, for a package including the framework and child theme).

For developers or seasoned WordPress users (or people learning WordPress development!), I think Genesis provides a ton of value. It’s a clean, easily customizable (via code) framework that optimizes your site in a number of ways. So if you’re running a serious business, it’s going to provide you with the proper foundation to grow on.

But Genesis is definitely not the perfect solution for every single WordPress user.

For example, if you’re a total beginner trying to build a WordPress site without help, I don’t think Genesis is your best option. For your specific situation, I would recommend something like Divi because it’s much easier for a beginner to use with its built-in drag and drop editing.

The same applies to someone who wants to be able to quickly spin up new landing pages without needing to know any code. Divi makes that easy…Genesis doesn’t.

One nice thing about Genesis, though, is the new StudioPress Sites offering. It gives you a managed, all-in-one solution for using Genesis. So if you don’t want to worry about hosting and updates, StudioPress Sites is another tick in Genesis’ favor.

What do you think? Do you like the Genesis Framework or the big builders like Divi and Avada? Or something else?

Genesis vs PageLines: Which One Really Meets Your Needs?